The year was 2002. A tall blonde girl with colorful ribbons tied in her hair that matched her jersey stepped onto the basketball court for what would be her first and last season. She “played” in every game, yet never scored a point. In fact, she only attempted two shots and rarely even touched the ball since she would duck and scream every time a teammate made the unfortunate choice to pass it her direction.

“Shoot it! Shoot it!” We screamed idealistically. Game after game. Alas, it was not to be.

If you are expecting a great comeback story or a tale about the triumph of the human spirit, you’ll need to look elsewhere. The truth is, this kid just wasn’t good at basketball and she couldn’t have cared less.

League rules required that each player participate for a minimum amount of minutes per game, so she was guaranteed time on the court. League rules also guaranteed a trophy at season’s end – win or lose – for every player. So the girl proudly stepped forward, posed for the team photo, and accepted her prize. 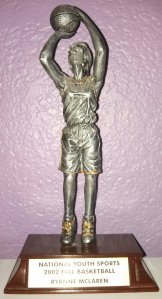 We’ve all heard the saying “If everybody’s special, then nobody is.”   Well, that’s only partly right; no, everybody can’t be special at EVERYTHING, but everybody can be special at SOMETHING. The key is to find out what that something is. And not all somethings give trophies, but that’s okay.

You see, the ribboned girl who was miserably bad at basketball would have much rather have been home playing piano or reading a book. So, not surprisingly, those are the areas in which she has excelled.  She’s earned numerous awards for music, writing, and academics. But you know what? She tends to question their significance. “Well, there were only ten other entries.” “I don’t think they must have been scoring very hard.” “I’m not really sure I deserved this.”

What have we done? Perhaps the “prizes for all” approach has more damaging effects than we imagined.   Perhaps giving trophies for everything affects our perception of accolades for anything. Maybe those early “wins” designed to spare littles’ feelings have resulted in making them feel that there really aren’t honors to be earned, but rather that every certificate, ribbon, and medal lacks true significance because so many are simply tokens of participation.  Not only are legitimate prizes devalued, but often the work needed to achieve an actual goal is undermined.

I get it. We don’t want six-year-olds to cry. But perhaps we should worry less about hurting their feelings and more about preparing them for life. In the real world you don’t get a trophy for showing up. In grown-up land, you are expected to show up and accomplish things.  In fact, you are PENALIZED for not doing so. Better to learn this lesson early.

I fear that society is already reaping the rewards of the “trophy for participation” generation.

I work with young adults who want to enter the teaching profession. To be fair, some of the twenty-somethings I work with are really, really impressive. For example, I supervised a young man last year who was bright, articulate, responsible, wise … oh, yeah, all while battling leukemia. He never made excuses. He never missed a deadline. He was never anything other than mature and competent.

Give that kid a trophy.

Actually, he doesn’t need one. He’s got something better going for him. He’s earning a living and establishing his professional reputation. How? By being really good at what he does every day. By showing up when others don’t, but not expecting any special recognition for doing what people have been expected to do for generations – their jobs.

Sadly, this young man seems to be a rarity among his peers. It has been my experience that many twenty-somethings expect to be given an “A” for effort… and sometimes not even that. They don’t seem to realize that when they don’t show up, complete the work, meet the deadline, or work well with others, it reflects badly on them and affects other people. They expect to be told “great job” regardless of how many mistakes they make. They want a pat on the back for doing the bare minimum academically or professionally and sometimes even CRY when their errors are pointed out. Seriously.

They seem to believe that “really wanting something” is the same as “really earning something.” It’s not.

We would do well to teach this generation about working hard and that includes expecting failure from time to time and growing from those experiences. And maybe we should think twice about just giving them all trophies so that they will know what it feels like to actually earn something of worth… so that when they do, it will actually have value and mean something rather than just being another mass-produced token of nothingness.

As the old Smith Barney ad used to say, “We make money the old-fashioned way. We EARN it.” Hmmm…maybe they had something there. We can’t afford another entitlement generation. Something’s got to change.

Oh, and don’t be surprised if you see a teacher-of-the-year named “Jake” in a few years. Because there are still good reasons for trophies. I’m okay with that.